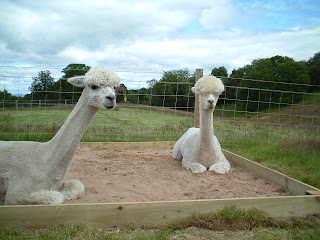 Its not that we pamper our boys (much!) but they have a sandpit in each of their paddocks.  During the winter they don't use them - but the rabbits do!  However, during the rest of the year they love to just lie in the sand or roll about in it.  Even on the hottest days the sand is cool, and after a feed they chill out.  The photo (above) was taken shortly after the boys were sheared and shows Fyta (left) and Fergus - both showing off their cool haircuts.  During the present freezing weather I think it is nice to see a summer photo.  We are often asked if the boys spit.  Alpacas do spit at each other, especially when there is food around.  Our guys are no exception to this and often we hear a spitting noise then a fine mist flies through the air in the direction of another alpaca.  Sometimes it is more than fine mist and lots of chewed up grass ends up on the back of an animal's head!  This spit smells awful, like a really bad case of halitosis and if a human gets in the way, then a good wash or shower is needed.  Unfortunately the animal which spits, and the spat upon animal end up being unable to eat anything for around 10 - 15 minutes.  Their lower lips droop, they often have a drip of green saliva falling from the lip and they look thoroughly miserable.  They look like the Donkey in the Shrek movies with their teeth bared and droopy lip!  A couple of the boys go and grab a mouthful of hay and stand there waiting for the taste and smell to disappear before their systems allow them to chew and swallow again.   Sometimes one of the boys will sneeze, and if it is close to one of the other boys, the same symptoms can appear.  First time we saw this was on Fergus, a couple of days after we got the boys in 2007 and we thought he had been stung by a bee!
Posted by Shirley at Saturday, December 19, 2009