After all the snow, it's hard to see what the boys find to eat on the flattened, dead grass.  However, it is clear that there are new blades of grass growing which they are enjoying.  Fergus and Fyta are intent on nibbling everything they see!

Today we put the boys in the catch pen again so that we could do a few more nails and put some cream on Faro's bald spots on his ankles.  Following the last application of cream, these bald spots do seem to be improving.  The boys were not exactly in the right mood for any work today as they had been lying around when we decided to call them to the pen - and they took off in the opposite direction! (Mental note: don't try training when the students are chilling out!)  Plenty of 'humming' in the pen and Fergus was not too co-operative when his back nails needed trimming.

Gaucho with Fyta behind.  He was much better today when the halter was put on and taken off, but he still does not like going for 'walkies.' 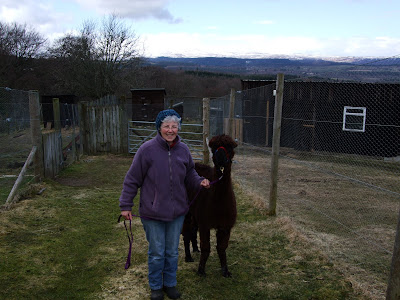 After the nail trimming, the boys 'walk the walk' in what we call the 'alleyway' and this is Faro being led.  This alleyway was created before we got the boys but in readiness for them coming so that there would be a double fence barrier to stop leaves, especially Rhododendron, blowing into the paddock from the garden (to the left.)  The prevailing westerly wind blows in the direction of the paddocks and we have many Rhoddie bushes around our garden.  We have trimmed them back but they have grown even quicker, so the threat of blown leaves still exists.  After flowering this year we are going to remove them completely.
Posted by Shirley at Sunday, April 04, 2010