Lassies - but not the Camelid kind!

When a car and trailer pulled up at the entrance to our field adjoining the paddocks last weekend, the boys really got a shock when two different  girls jumped out and ran the length of the field before hiding in the bottom corner!  This is the boys' reaction when the trailer was opened.

A long range shot of our two guests, Freda (L) and Lola (R) who are 20 months old Highland heifers.  Our near neighbour Colin has put them in the field to keep them away from his bull, for a while.  Freda and Lola are quite shy staying in the bottom part of the field but venturing up to the paddock fence line now and again.  Our boys have seen 'Heilan Coos' before belonging to our neighbour, but I doubt that Freda & Lola have ever seen Alpacas before!  They look at each other through the fence quite a lot, but they still getting used to each other.  We'll get more close up shots of these lovely girls in due course. 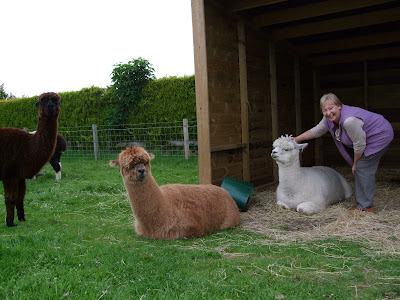 We also had Anne & Duncan as visitors and Anne is seen stroking Fergus's bonnet a couple of days before the boys were sheared.  Gaucho is lying in front of Fergus with Faro to the left and Fyta in the rear.  We've had Gaucho for almost a year and during that time he has always had a heavy fringe which gave him a piercing look which was a cross between frowning and scowling
. 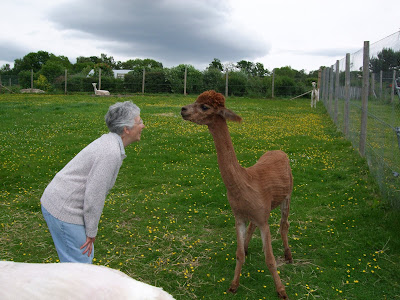 Now look at him after being sheared and fringe trimmed - what a poppet eh?!  We had a visit from James Dixon and assistant John mid week and they did a great job of shearing the boys.   We also visited Karen & Dave at Beauly to shear their 3 boys and John McKenzie at Dingwall to shear his 4 boys.  All the animals were the better of being relieved of their fleece as the weather recently has been hot and humid.
Posted by Shirley at Friday, June 25, 2010