Guarding - and a little surprise!

Being the Guard within the herd, Faro takes his duties seriously.  He is always the first to investigate anything, always first to check out visitors, patrols in front of the field shelters when the other boys are inside - and likes to check out exactly what is happening on a 'poop patrol!'  When Robbie appears with his bucket and barrow Faro usually puts in an appearance and is obviously less than impressed with someone 'nicking' the boys' poo!  If Robbie bends down Faro likes to put his head on Robbie's neck presenting a curious spectacle to any on-lookers.  If Faro has been in the water tray it's a very soggy head being pressed down  on the neck and bald spot!  None of the other boys is bothered with the poop-patrol, but Faro is obviously programmed to make sure that it is not removed.  He soon gets bored with this silly game and walks away!  New boy Rufus (with white face) can be seen in the background. 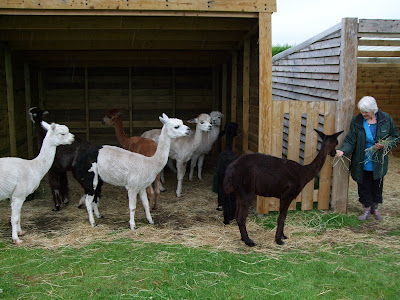 Our old friends Fay and Brian visited on a very damp evening to see the boys.  Like all hardy, macho mountain animals the boys run into the shelters when it rains (!) and here Faro checks out what is being offered by Fay to eat.  New boys Rufus (2nd left) and Echo (inside, behind Faro) have both settled down well with the herd.  We penned them this week, Gully had cream rubbed on his itchy ears and Rufus and Echo had their first neck rubbing session which was enjoyed more by the owners than the animals!

Remember Freda (L) and Lola?  Here they are, getting a little more adventurous and standing their ground by the fence.  Look to the right of the water trough and you will see a patch of brown on the ground.........

And here is the patch of brown - a wee calf!  We all got a shock, including the owners, a few days ago to find that Lola had given birth but mum and son/daughter are both doing well. And finally.........taken near our back door, a shot of Pansy Potter sitting near the Catmint bush before chewing a piece.
Posted by Shirley at Sunday, July 11, 2010