It's now just over 2 weeks since our new boys Rufus and Echo were delivered and they have settled in very well.  Echo ('Wee Eck') is in the thick of the action every day but Rufus is still quite reserved, enjoying his own space and sometimes humming gently. This shows Eck at the front,Gaucho in the middle and Rufus with the white face, in their field shelter.  Gully is on the extreme left eating his hay! 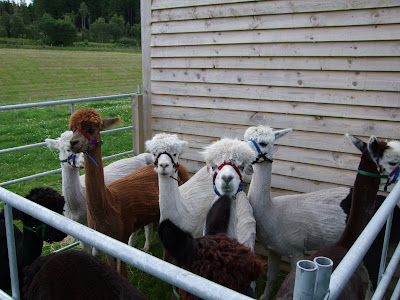 We penned the boys this week, put their halters on and creamed Gully's ears.  For Eck, extreme left, this was the first time he has had a halter on as far as we know, so there was a bit of leaping about before he accepted it.  He's not used to being handled but the neck stroking did have some positive effect this time.  Rufus, extreme right, we think has had a halter on, but a long time ago.  This was his first halter experience with us and he took it remarkably well.  The other boys all accept their halters well, with the exception of Fidget who likes to put up a bit of resistance because he is sensitive around his face.  This was a short first session for the new boys and we'll keep up regular fittings now until they get used to the procedure.

We have had terrible weather during the past week with days of gales and driving rain so the field shelters were much in use.  This shows all the boys fitting into the one shelter although they usually spread out and use the other shelter too.  Fergus, at the rear shows, his contempt for the photographer by having a poo at the wrong moment! 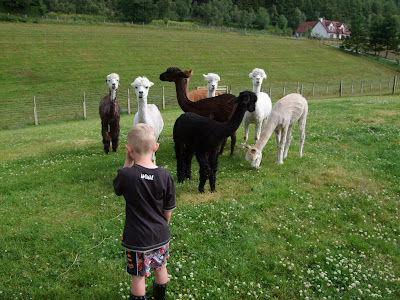 During a rare break in the bad weather we had a visit from relatives Pauline, Chick and son Matthew and this shows Matthew casting an eye over the herd whilst they in turn are wondering who this little human being is!

And finally....it is little wonder we are buying peanuts by the sackload.  Not only are we feeding countless sparrows, tits, woodpeckers, siskins and green finches but this little chap who lives under a flowerpot (and drives the cat crazy!) joins in the feeding frenzy too.  Seconds later and to prove that he can (almost) fly, he leapt off the nuts onto the ground.
Posted by Shirley at Sunday, July 18, 2010