Thought we'd put in a couple of photos for the horticulturally minded amongst you! This shot is taken from the vegetable garden looking west over the boys in the lower paddock and away towards Beinn a' Bha'ach Ard and shows a new dusting of snow on the tops this week. Also in the middle of the photo is the steading, the roof of which we nearly lost due to snow weight in the winter.  The roof has now been completely re-enforced with new rafters.  The early tatties are shown in one of the plots but this week the frost nipped all of the shoots which then turned black.  They are now beginning to grow again.

This photo, looking north was taken later in the day with the boys at the fence line looking at cattle in the adjoining field.  Robbie has been hard at work over the past few days getting the veg plots ready for planting.  Some veg is already in, but due to the cold weather planting has been delayed.  The Keder greenhouse (a cross between a greenhouse and a polytunnel) can be seen at the centre left and early tatties, carrots and dwarf beans are well advanced inside.  We've even had a few strawberries and grapes are forming on the two vines (don't hold your breath for the vino just yet!) 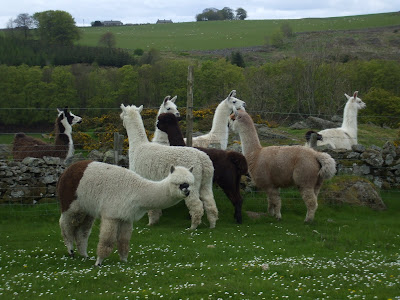 And finally.............. a real delight to show you a photo sent to us by Lorna & Sandy at Ardo Alpacas.  It shows four of their boys looking over the fence at four of their Llamas.  The boys, L to R, are Goals (the brother of our Fyta), Liam, Gottit (the sire of three of our boys) and Turkish.  Gottit and Turkish were with us for about a year before going back to Ardo Alpacas, but they did leave their fleece behind for me to spin.  Turkish is a beautiful rose grey boy and I've crocheted and knitted scarves from him.
Posted by Shirley at Saturday, May 29, 2010