We have enjoyed pleasant weather over the past few days, not nearly as hot as further south in UK, but with plenty of sunshine.  The nights can be quite misty which means the boys have a covering of dew on them which they then convert to mud on their favourite rolling places!  Its lovely to see them gathering around their water trays and troughs after their breakfast haylage.  Here Fyta is on the left, Fidget is lying down, Fergus is in front with Gaucho behind him and Faro at the rear, and a dirty Gully on the right.

Fergus is warning Gaucho not to get into 'his space' here.  No spitting, just lots of grunting and squeaking noises from Fergus and his head thrown back - audible and visible warnings!

Status Quo!  Note the early morning mist and cloud on the hills behind.

Not so much a 'gaggle', more a 'hum' of boys - in more ways than one as they are damp and dirty - especially Gully in the foreground. 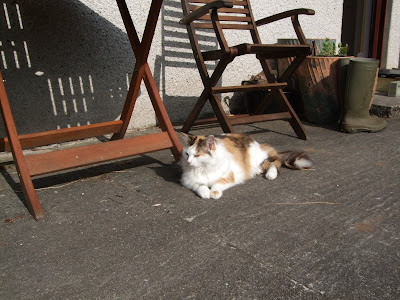 and finally....... this is Pansy Potter, also enjoying the early morning sun at the back door!  She is 14 yrs old and is still getting over the loss of her life long pussy cat pal Flo-Jo a couple of months ago.  Pansy doesn't go near the boys because they congregate at the fence watching her any time she goes near them and this spooks her a bit.
Posted by Shirley at Sunday, May 23, 2010